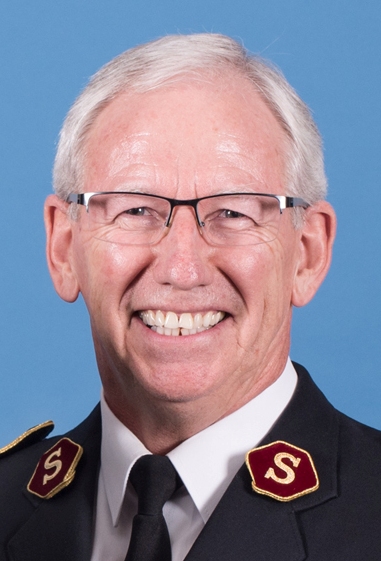 Commissioned and ordained as a Salvation Army officer in 1977 as a member of the Companions of Christ Session, General Brian Peddle has served in partnership with his wife, Commissioner Rosalie Peddle, since their marriage in 1978. Initial service in his home territory of Canada and Bermuda, included corps, divisional and training college appointments.

The General’s first international appointment was to Auckland, in the New Zealand, Fiji and Tonga Territory, as divisional commander. He was transferred to territorial headquarters in the United Kingdom with the Republic of Ireland Territory to serve as chief secretary, with the rank of colonel. A return to the Canada and Bermuda Territory followed in 2011, to take up leadership as territorial commander, with promotion to the rank of commissioner.

Service at International Headquarters initially came on 1 September 2014 as International Secretary for Americas and Caribbean, prior to his appointment as Chief of the Staff on 1 November 2015.

It was on 25 May 2018 that Commissioner Brian Peddle was elected as the 21st General of The Salvation Army, to assume office on 3 August that same year.

Outside of his ministry, the General enjoys kayaking, cycling, hiking and fishing. The General and Commissioner Peddle have two daughters, Stephanie and Krista, as well as five grandchildren.

The General has a strong sense of calling as a Salvation Army officer, fuelled by his conviction that God continues to use The Salvation Army to impact the world. The General and Commissioner Peddle are convinced of their responsibility to preach the gospel, encourage the saints and serve those in need.